PostgreSQL is more than a RDBMS engine. It is a developing platform. It provides a very powerful and flexible programming language called PL/pgSQL. Using this language you can write your own user-defined functions to achieve abstraction levels and procedural calculations that would be difficult to achieve with plain SQL (and sometimes impossible to achieve without context-switching with the application). While you always could develop and manage your own functions within OmniDB, it is a recent feature that allows you to also debug your own functions.

OmniDB 2.3.0 introduced this great feature: a debugger for PL/pgSQL functions. It was implemented by scratch and takes advantage of hooks, an extensibility in PostgreSQL’s source code that allows us to perform custom actions when specific events are triggered in the database. For the debugger we use hooks that are triggered when PL/pgSQL functions are called, and each statement is executed.

This requires the user to install a binary library called omnidb_plugin and enable it in PostgreSQL’s config file. The debugger also uses a special schema with special tables to control the whole debugging process. This can be manually created or with an extension.

For more details on the installation, please refer to the instructions, also available in Chapter 23. Also please read the notes in this document, to be aware that currently there are some limitations.

After successfully installing the debugger, you will see a schema called omnidb in your database. Also, if you compiled the debugger yourself, you can install it as a PostgreSQL extension, and in this case it will appear under the Extensions tree node. 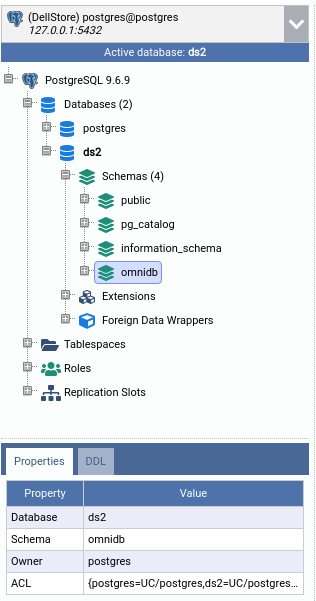 In the public schema, right-click the Functions node and click on Create Function. It will open a SQL Query inner tab, already containing a SQL Template to help you create your first PL/pgSQL function. 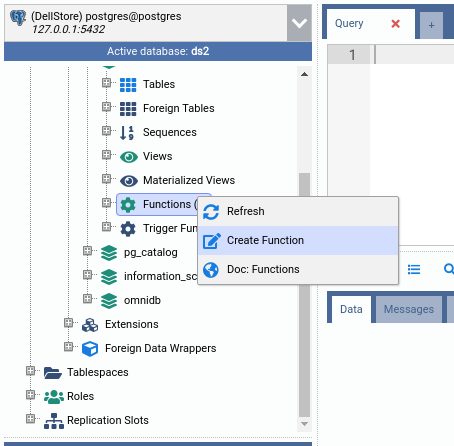 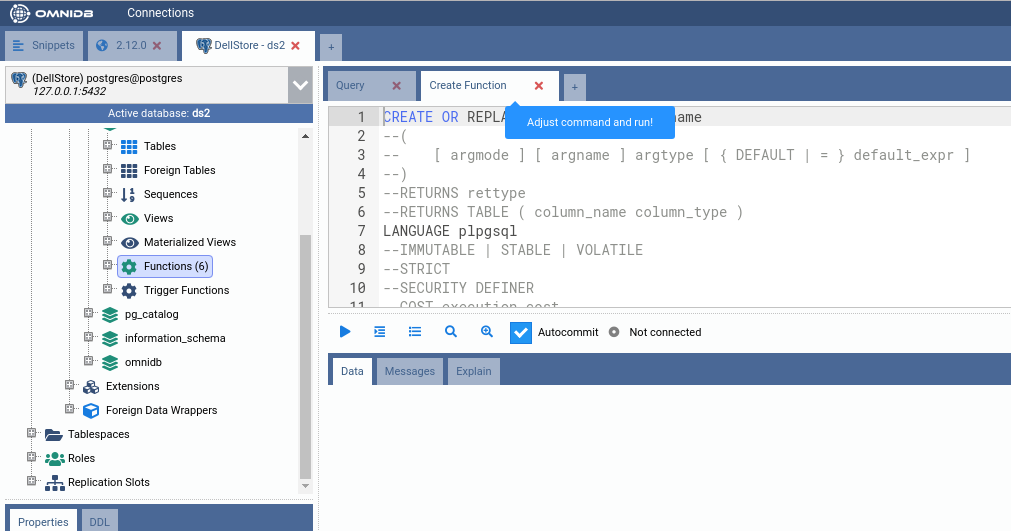 You can refer to PostgreSQL documentation on how to write user-defined functions. No need to open a new browser tab: just right-click the Functions node and click on Doc: Functions to view the documentation inside OmniDB.

For now, let us replace this SQL template entirely for the source code below:

This will create a function called fnc_count_vowels inside the schema public. This function takes a text argument called p_input and counts how many vowels there are in this string. Then returns this count.

To create the function, execute the command in the SQL Query inner tab. If successful, the function will appear under the Functions tree node (you can refresh it by right-clicking and then clicking in Refresh). By expanding the function node as well, you can see its return type and its argument. 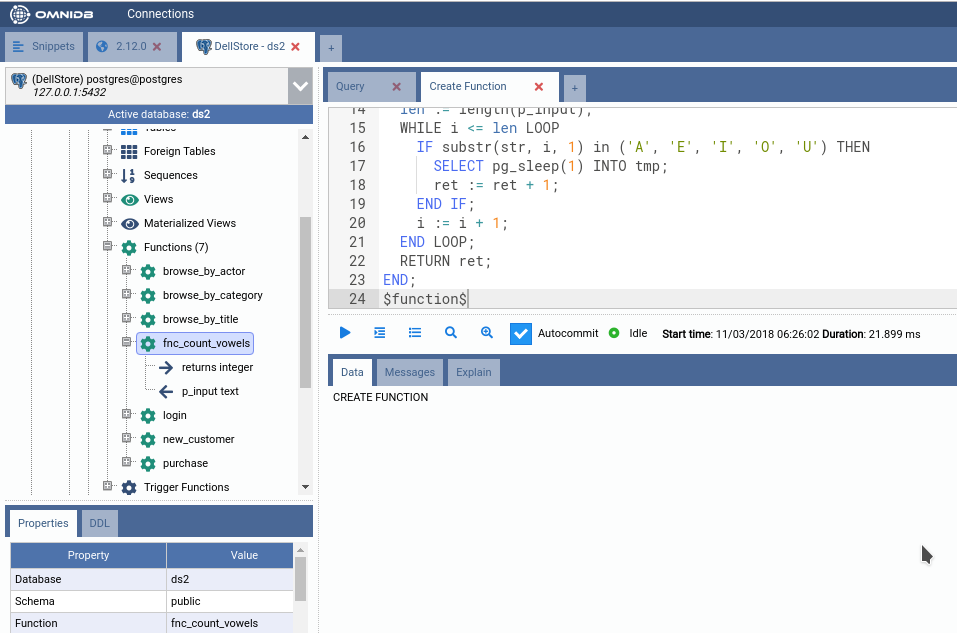 Note how the query returns a single value, containing the number of vowels in the text. Note also how the query took several seconds to finish; this is caused by the pg_sleep we put in the source code of the function fnc_count_vowels.

By right-clicking the function node, you can see there are actions to edit, select and drop it. As you probably guessed, each action will open SQL Query inner tabs with handy SQL templates in them. But the most interesting action right now is Debug Function. Go ahead and click it! 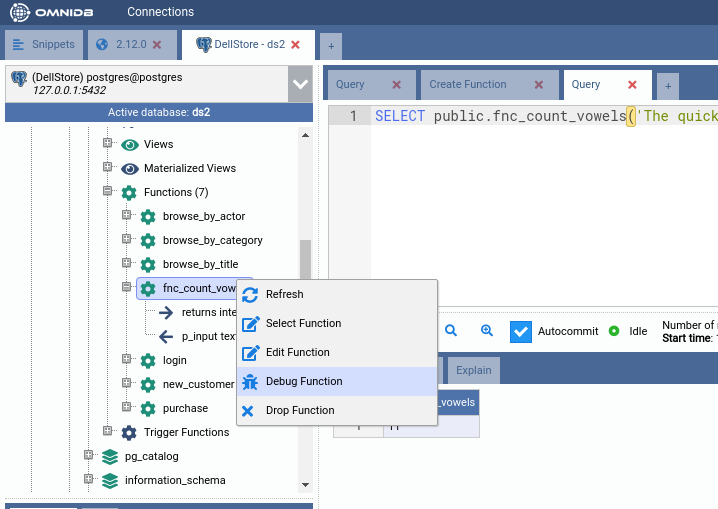 The debugger is a specific inner tab composed of a SQL editor that will show the process step by step on top of the function source code, and 5 tabs to manage and view different parts of the debugger. 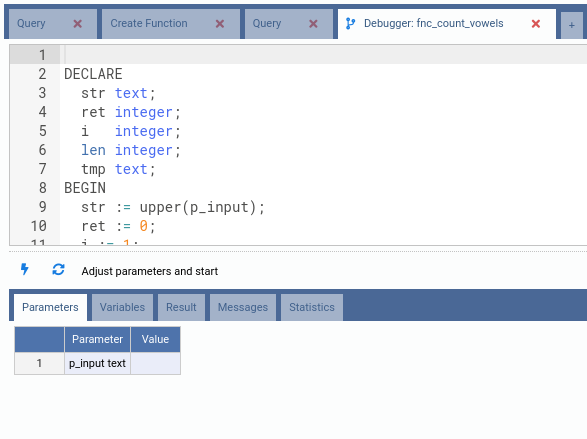 Now let us start debugging this function. First thing to do is to fill every parameter in the Parameters tab: 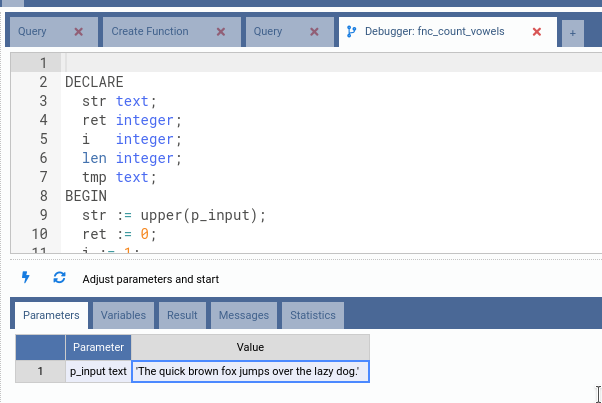 Then click on the Start button. Note how OmniDB automatically goes to the Variables tab, which is the interesting tab now that the function is being debugged. The argument p_input is now called $1, indicating the first argument of the function. Also note the variable found, which is a PostgreSQL reserved variable that indicates whether or not a query has returned values inside of the function.

Also note that OmniDB points to the first line of the source code of the function, highlighting it in green. This is the line that is about to be executed. 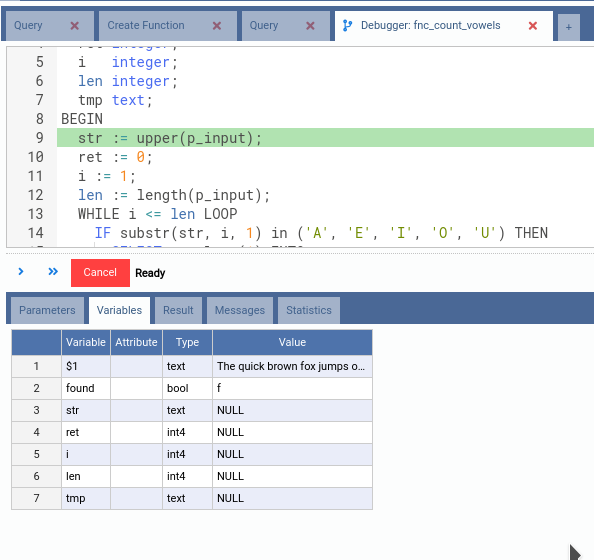 Now click in the first button below the SQL editor. It is the Step Over button, and it means that OmniDB will execute the next statement and stop right after it. 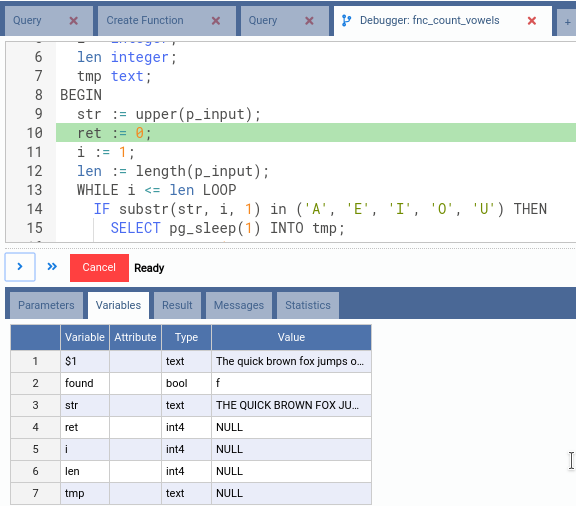 Note how the variable str has the value assigned to it during execution of line 9. Right now OmniDB is about to execute line 10, showing the current execution state.

Now that you know how to step over, let us speed up things a little bit. Click on the header of the line 20, the last line of code. By doing this, you just placed a breakpoint. The debugger interface allows you to place one breakpoint at a time. 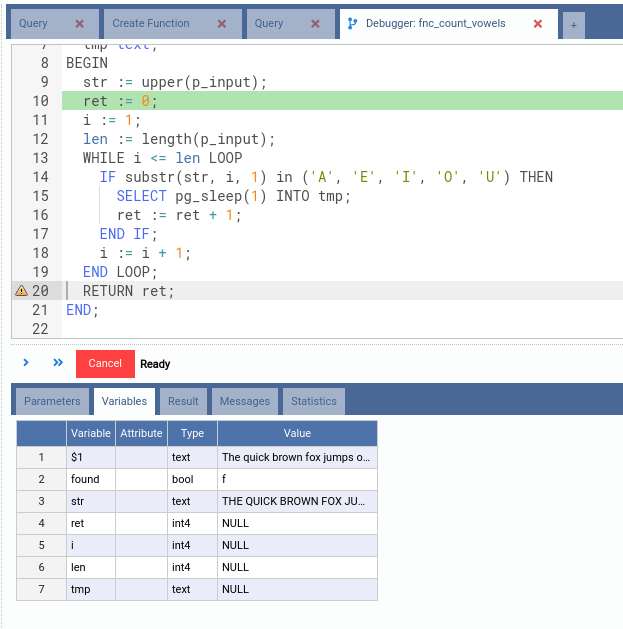 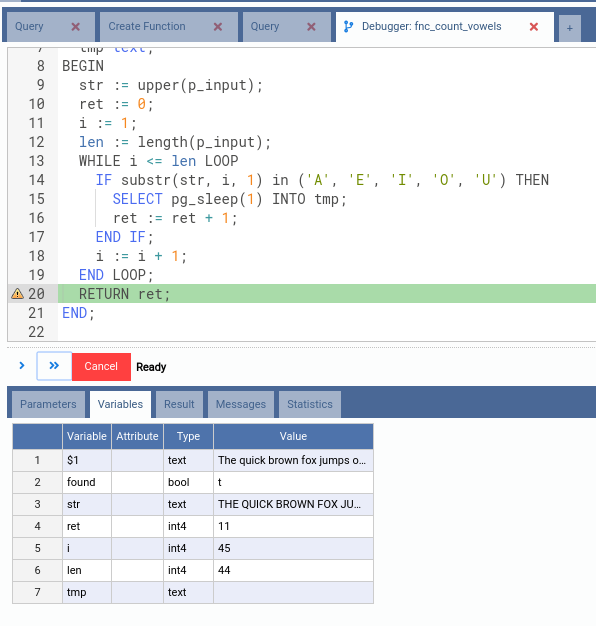 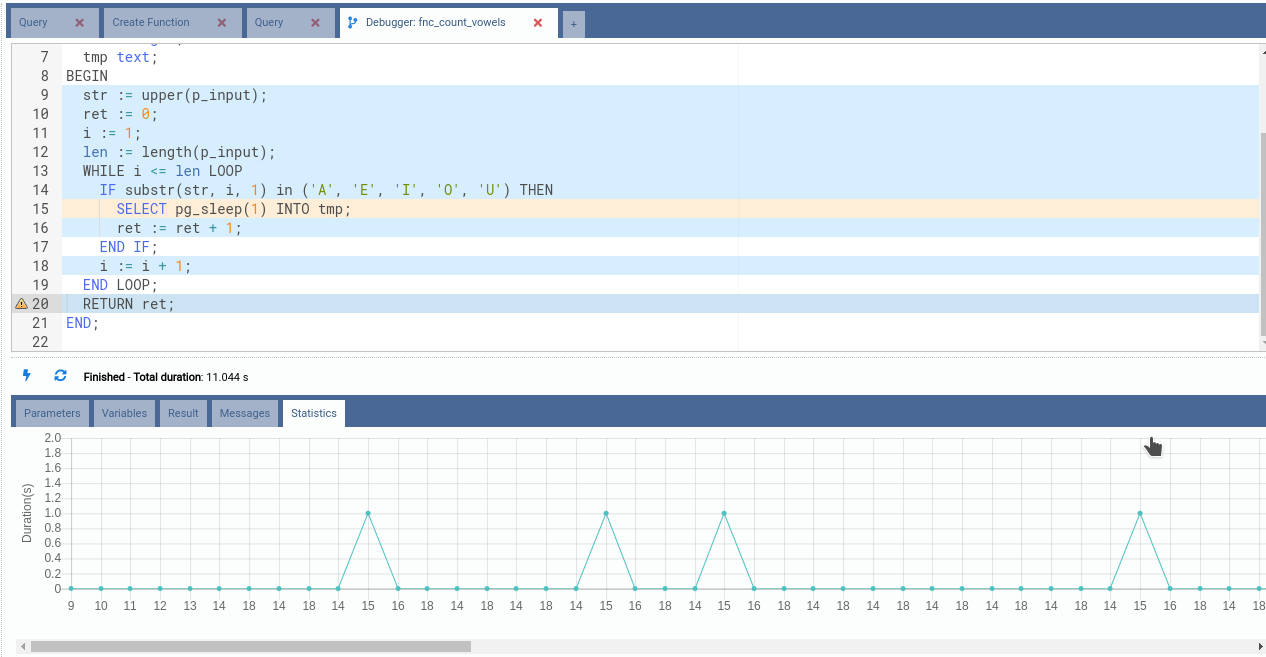 OmniDB will go automatically to the Statistics tab, which shows 2 interesting features:

Also note the Total duration message, which shows execution time of the function, without considering the time you spent analyzing it.

An interesting feature that we do not usually see in other debuggers is the ability to inspect each attribute of a variable of type record. OmniDB debugger does that as it is split into different variables, allowing you to see the value and type of each attribute.

To illustrate that, let us create another function, similar to the previous one, but now called fnc_count_vowels2:

Observe how we keep track of every vowel count individually. Now let us start debugging it, using the same text as before ('The quick brown fox jumps over the lazy dog.'): 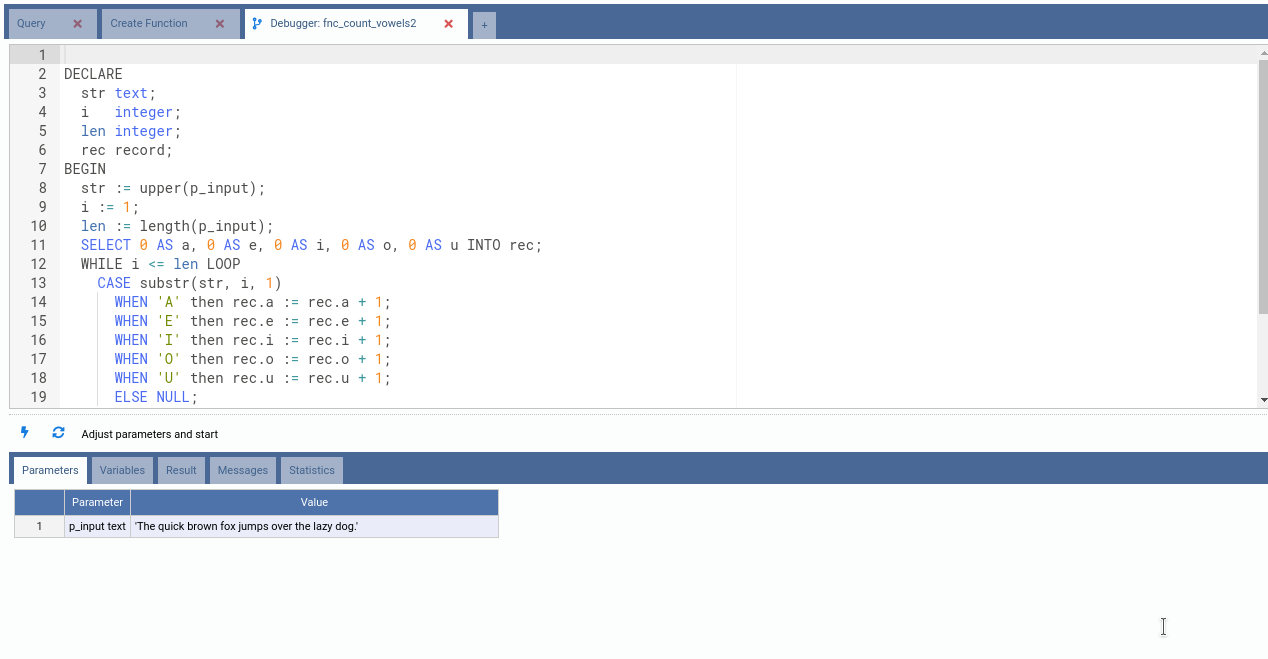 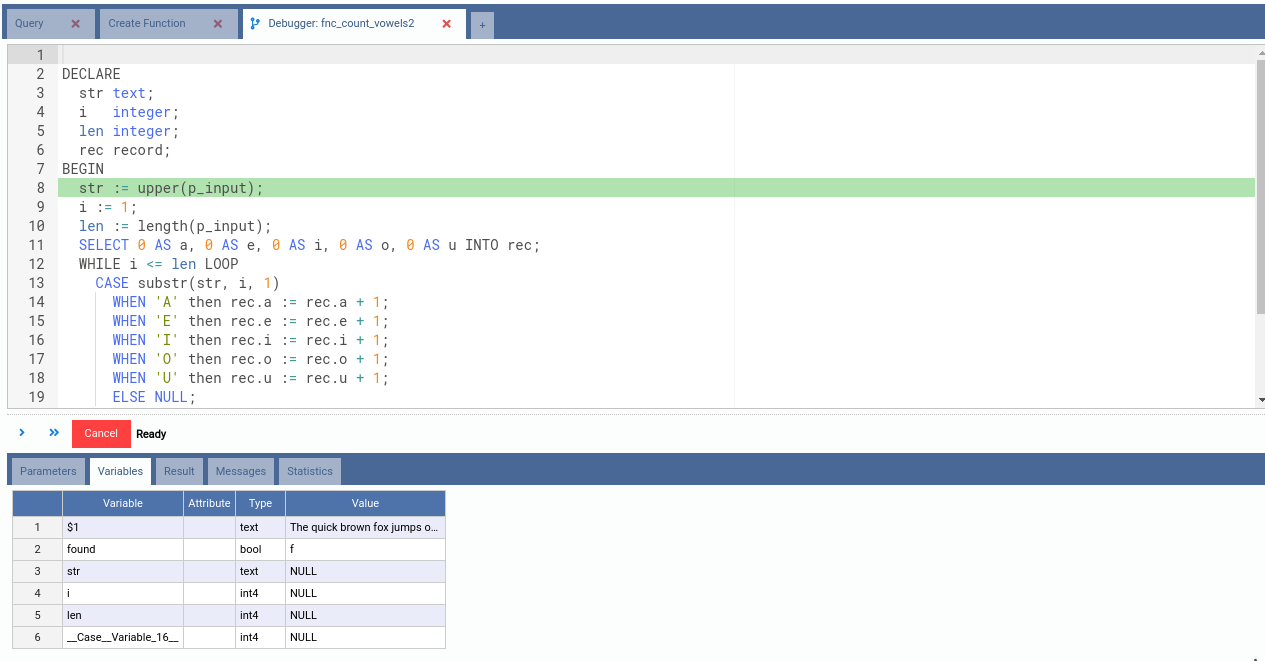 Note from the picture above that PostgreSQL created an internal Case Variable. Also note that the variable rec is not shown in the list of known variables. This is because PostgreSQL still does not know what attributes rec will contain. Let’s step over some more steps. 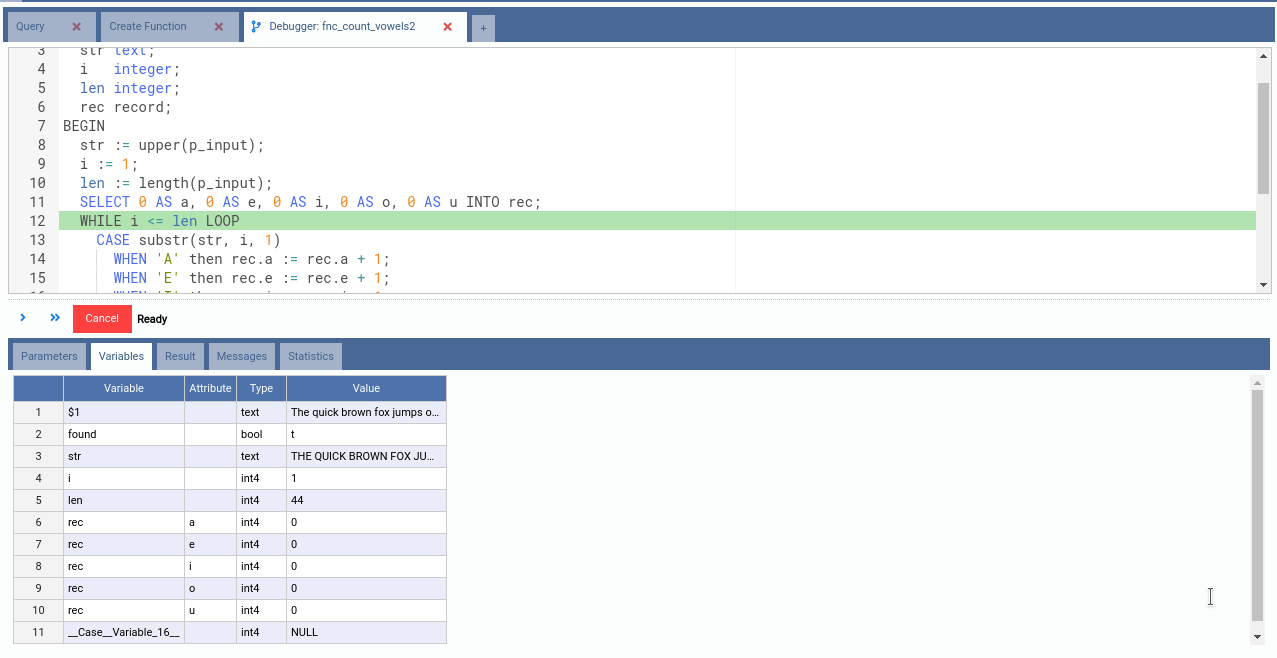 Right after the execution of line 11, rec variable comes to life and we can see it has 5 attributes: a, e, i, o and u, all of the type int and having initial value 0.

Now set a breakpoint in line 23 and click the Resume button. 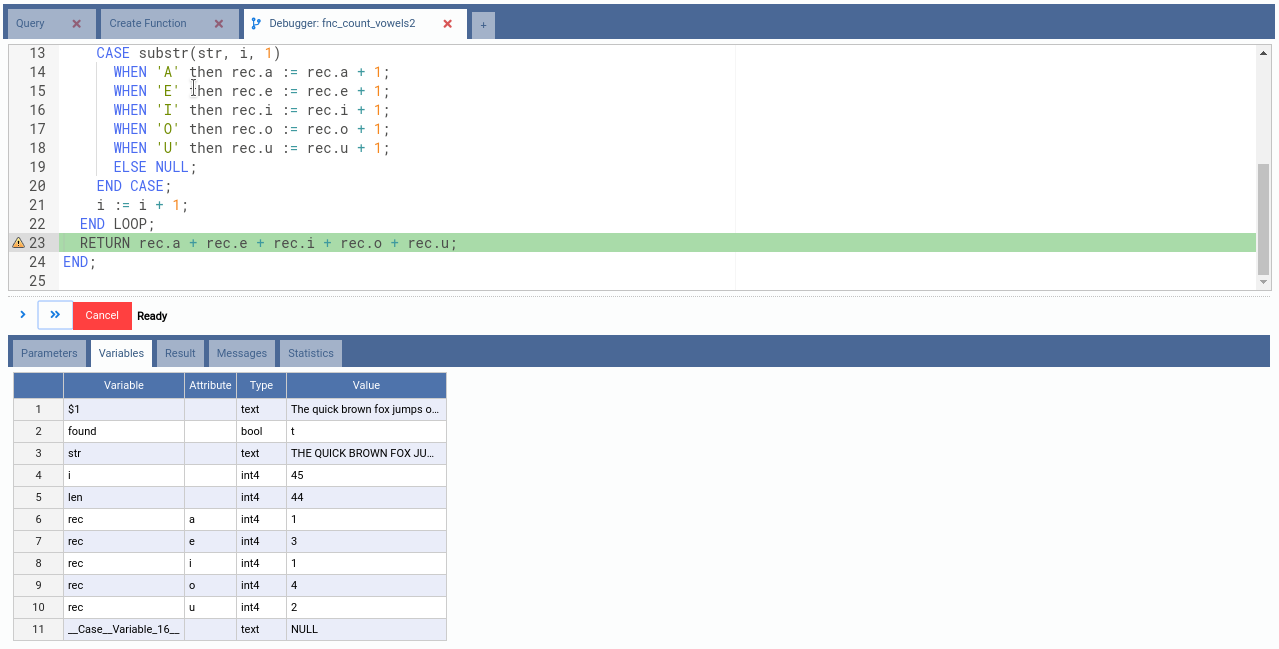 See how we can inspect every attribute, observing how many of each vowel the text contain. Now let’s finish this function. 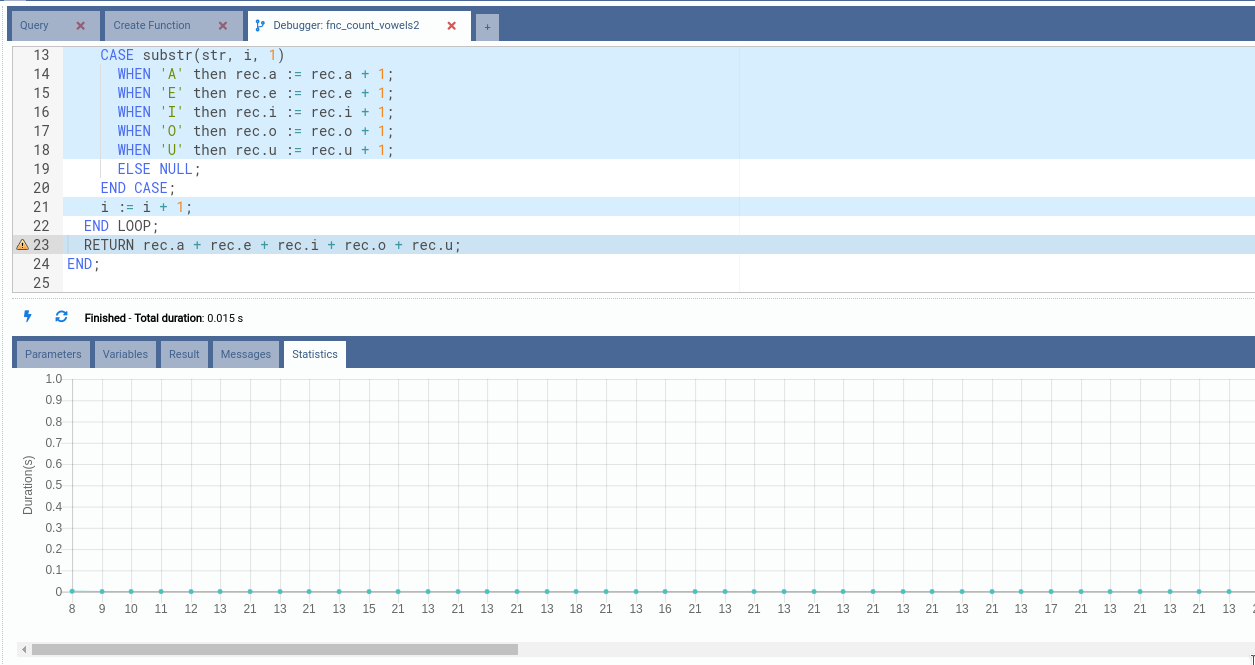